RCI to Exhibit at METALCON 2018 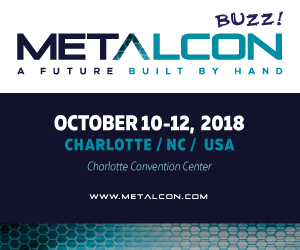 Newton, Mass., Sept. 27, 2018—Charlotte is where it’s all happening for METALCON, and despite the wrath of Hurricane Florence, Charlotte is back on track. The metal construction industry’s largest international event for metal construction products, technologies, and solutions takes place in less than two weeks from October 10-12 at the Charlotte Convention Center.

“Charlotte weathered Hurricane Florence and is doing well,” says Charlotte Regional Visitor Authority (CRVA) Director of Communications, Laura White. “While we experienced significant rain and some flooding, the city is operating back to normal.”

Among the many reasons METALCON named Charlotte as the location of choice this year is because of its metal manufacturing industry base. More than 600 regional companies employing nearly 16,000 employees comprise related industries. Nucor Corporation is a Fortune 500 company headquartered in Charlotte, with $16.2 billion in annual revenues and a profit of nearly $800 million. It is the largest U.S.-based steel manufacturer and the 12th largest steel producer in the world.

To that end, METALCON welcomes former CEO of Nucor and senior trade adviser to President Trump’s Campaign, Dan DiMicco as one of two Charlotte-area VIPs to speak at METALCON this year.  DiMicco will present “The Economic Plan for Growth and Global Competitiveness in the United States―Implications for Steel.”  While Steve Smith, Sr., a 16-year NFL veteran and former five-time pro bowl, three-time all-pro wide receiver for the Carolina Panthers will present “Perseverance, Teamwork and Overcoming Obstacles.”  Also this year, METALCON is giving back to the local community through the Steve Smith Family Foundation, a non-profit organization dedicated to helping families impacted by domestic violence and to promoting child health and wellness in the Charlotte area.

According to the CRVA, construction is booming in Charlotte, and it is now calling the “Crane” the “official” bird of the city with a multitude of construction projects taking place Uptown and in the South End.  Charlotte Center City Partner’s 2018 State of the Center City, highlights office, retail, hotel and residential developments currently underway.  Additional development projects taking place include the Charlotte Convention Center expansion, the light rail extension, airport expansion and hotel development.

According to the CRVA, Charlotte is the 16th largest city in the nation and home to more than 2.7 million people and counting.  Yet, even as one of the country’s fastest growing cities, it’s the Queen City’s unmeasurable amenities—its friendly and welcoming attitude, its longstanding tradition of hometown pride—that draws international crowds.

“We are so happy Charlotte is back on track after Hurricane Florence,” said METALCON Show Director, Claire Kilcoyne.  “We look forward to gathering in the heart of Uptown and being part of the undeniable energy of a city on the rise.”

Established in 1991, METALCON is the largest international event in the metal construction industry.  Unique in both its service and show management to this industry, METALCON is the only annual tradeshow and conference devoted entirely to the application of metal in industrial, institutional, light commercial and residential projects.  Its success is based on three key methods of education: exhibits, an extensive conference program and interactive, learning opportunities.  METALCON is produced by PSMJ Resources, Inc., and sponsored by The Metal Construction Association. This is the event’s first time in Charlotte.  For more information, visit www.metalcon.com or call 800-537-7765.