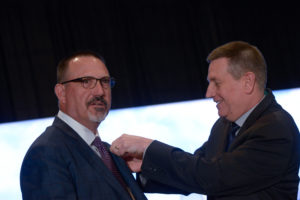 Highlights from the final full day of events at the 2022 IIBEC International Convention and Trade Show in Orlando, Florida, included the Annual Meeting of the Members and a strong slate of educational sessions.

Ted Sheridan passed the  gavel to new IIBEC President Chris Giffin, whose speech emphasized a bright future for IIBEC after another year of the pandemic.

During the meeting, IIBEC concluded the Executive Committee election and welcomed Chris Dawkins as its new secretary-treasurer.

The IIBEC Board of Directors and Executive Committee for 2022–2023 are: IIBEC Chief Executive Officer and Executive Vice President Brian Pallasch presented on the state of the association, highlighting new publications as well as a national marketing campaign to raise awareness of IIBEC and its members. Pallasch also unveiled a new 40th anniversary logo for IIBEC, which will celebrate its 40th anniversary at IIBEC’s annual convention and trade show March 2–7, 2023,  in Houston, Texas.

Education was the focus of much of the rest of Day Five at the convention. Six sessions comprised two 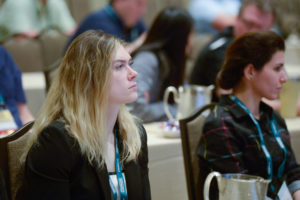 education blocks during the morning hours, followed by another six educational sessions spread across Monday afternoon. The day concluded with the President’s Reception and Annual Banquet.