Attendees of the 2022 IIBEC International Convention and Trade Show in Orlando, Florida, hit the trade show floor Sunday, March 20, and continued to learn about the latest products and services from more than 120 exhibitors gathered for the annual IIBEC event.

Later, at the Awards Luncheon sponsored by Sika Corp., IIBEC President Ted Sheridan presented awards in numerous categories to IIBEC members who had achieved excellence in the past year, as well as to IIBEC chapters ranking in the Outstanding Chapter Award program for work completed in 2021. The Horowitz Award, presented for best technical article in IIBEC Interface in the past year, went to Violet LaBrosse and Jason Wilen for their article, “Not Your Average Roof Replacement Case Study.”

Jury of Fellows Chair Warren French presented the Correll Award to David Balistreri and then inducted Ted Sheridan and Karl Schaack as the newest members to the IIBEC Jury of Fellows. The Busching Award went to Kami Farahmandpour and Paul Buccellato.

The Jury of Fellows Meeting and six education sessions filled the afternoon ahead of the RCI-IIBEC Foundations’ annual fundraiser, which featured silent and live auctions, door prizes, and a raffle. 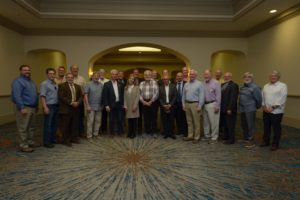 The 2022 IIBEC International Convention and Trade Show continues through March 22, 2022.