David C. Velcheck, RRC, CCS, president of Interstate Roof Systems Consultants (IRSC), will be leading the company’s Wisconsin, Illinois, and Colorado offices. He is an industry veteran with more than 26 years of experience in commercial roof and wall management programs nationwide and has extensive experience with water entry investigations and roof repair. Velcheck is a member of RCI and CSI. 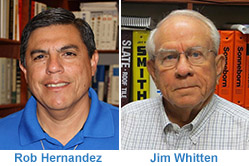 Jim Whitten Roof Consultants, LLC has obtained its Minority Owned Business Enterprise (MBE) certification and Historically Underutilized Business (HUB) certification. These certifications allow JWRC to compete for more governmental construction contracts and expand its focus in education, commercial, and private sector work across Texas. RCI Consultant Affiliate member Rob Hernandez was recently appointed president and majority owner of JWRC. He has been with the company since 2005 and served as vice president since 2007. Founder Jim Whitten remains as vice president of the business established in 1999. He is a Consultant member of RCI.

RDH has promoted ten new principals and associates. They include James Bourget, RRO, who has over 35 years of experience in the industry. He has been a part-time instructor at the British Columbia Institute of Technology, and is now a principal and construction specialist for RDH. He received his Diploma of Technology (Dipl T) in Architectural Building Engineering Technology, Building Science Option with Honours, from the British Columbia Institute of Technology. He is a Consultant Affiliate member of RCI, and a member of the Western Canada Chapter.

Robin Breuer, RRO, is now an associate and senior project manager. He first joined the Vancouver office in 1998. He is a member of RCI and of the Applied Science Technologists and Technicians of British Columbia. He received his Dipl T in building engineering technology from the British Columbia Institute of Technology. Breuer has a wide range of enclosure assembly experience including roofing, waterproofing, curtain wall, window wall, stone, metal, EIFS, and stucco.

Raths, Raths & Johnson, Inc. (RRJ), an architectural, engineering, and forensic consulting firm headquartered in Willowbrook, IL, has promoted Patrick E. Reicher, REWC, REWO, SE, CCS, CCCA, as an associate principal. Reicher joined RRJ in 2016 as a senior engineer. He has over 12 years of experience in the industry, gaining experience in forensic engineering and structural design at two consulting engineering firms in the Chicago area. A consultant affiliate member of RRC, he has been a member of the REWO Exam Development Subcommittee, the Building Envelope Commissioning Task Force, and is on the Manual of Practice Task Force. For the Chicago Area Chapter of RCI, he is the treasurer, chair of the Education and Program Committee, and a member of the Audit and Finance Committee.

John Crawford, executive director at IRC Building Sciences Group in Mississauga, ON, has retired. Crawford was general manager of ED Roofing Limited in the 1990s. In May 1999, he became a partner and accounts manager at Flynn Canada. Taking on the role of COO at IRC in 2008, he became its executive director in 2012. Crawford was a Consultant member of RCI, having joined in 1999.

RCMA awarded Helene Hardy Pierce, Vice President of Technical Services, Codes and Industry Relations at GAF, the prestigious Martin A. Davis Industry Leadership Award for 2017. Pierce has served as a past president of RCMA and is on its current Board of Directors. The award was presented by outgoing RCMA President John Stubblefield, Polyglass, USA. “I was most honored to be able to speak with the membership not just regarding Helene’s numerous industry accomplishments and her technical product expertise, but also regarding her strong personal integrity,” said Stubblefield. “And that last point is truly what this legendary award best encompasses: recognizing someone like Helene who is a genuine leader in our industry.” Pierce is an RCI Fellow and long-time member of RCI. She has been active on numerous committees during her tenure with RCI, and is currently on the RCI Interface Editorial Board and the RCI Foundation Board of Directors.

Cattel Gives Back in Retirement

Gary R. Cattel, FRCI, PE, founder of REI Engineers, has had a busy retirement. He and his wife dedicated a new Hope Center for underprivileged youth in Managua, Nicaragua. The center can feed 60 kids a day, and supports families.