Back To News
January 20, 2017
Karen McElroy has recently accepted the additional responsibilities and title of Associate Director. When Executive Vice President and CEO James Birdsong is unavailable, McElroy will step in and make any necessary decisions. McElroy joined RCI in 2000. In addition to her new role, she will continue in her role as Senior Director of Conventions and Meetings. She coordinates massive amounts of information, people, and schedules in this role every year, and is the driving force behind the repeated success of our conventions and symposiums. 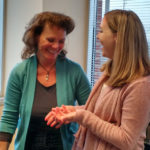 Ashley Johnson has been promoted to the position of Database Specialist. Johnson will serve as the primary staff person responsible for the management of our Association Management Software (AMS) database. Johnson has been a part of our team since April 2015 as the Member Services Specialist, where she excelled in her performance. In addition, she has been an integral part of our conversion from the iMIS database to the MemberSuite database during the past few months. She has attended numerous training programs in preparation for this assignment, and having her fill this vital position as a full-time assignment will serve our members and staff very well.