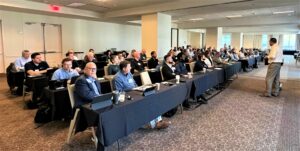 IIBEC gathered 65 attendees—comprising chapter leaders from 22 chapters and branches, region directors, and members of the IIBEC Board of Directors—October 20–21, 2022, for its Leadership Development Workshop at the Sheraton Raleigh Hotel in Raleigh, North Carolina.

IIBEC First Vice President Amy Peevey applauded the work of chapters in holding and promoting their events, and she encouraged chapter leaders to provide feedback on IIBEC’s strategic plan, which will be updated in 2023. Peevey added that, in lieu of the Platinum Award, next year’s chapter awards will feature a ruby award in honor of IIBEC’s 40th anniversary.

IIBEC Executive Vice President and Chief Executive Officer Brian Pallasch highlighted key IIBEC accomplishments in 2022 as part of a discussion about the IIBEC Strategic Plan, including the advancement at the ICC Building Code hearings of two key proposals related to secondary roof drainage and the defeat of cooperative procurement legislation in Ohio. He also pointed attendees to IIBEC’s newly updated Code of Ethics, and he elaborated on the different elements of IIBEC’s ongoing consultant marketing campaign.

After the lunch break, IIBEC Director of Education Kristen Kennedy talked about the challenges chapters face in delivering educational content to their members, and Chris Dawkins returned to talk about chapter advocacy and the need to coordinate such efforts with the entire IIBEC team.

Attendees then took part in two breakout sessions, moderated by IIBEC’s region directors, during which they shared their own experiences as chapter leaders in the building enclosure industry.

IIBEC Director of Government Relations John Boling share actions IIBEC has taken in support of its strategic plan, including a portfolio of policy statements approved by the IIBEC Board of Directors. Brian Pallasch, IIBEC’s executive vice president and chief executive officer, followed Boling’s presentation with a brief overview of IIBEC’s 40th anniversary in 2023. Articles and historical photos will be featured in IIBEC Interface, and a “birthday party” will be held March 5, 2023, during the 2023 IIBEC International Convention and Trade Show.

The day concluded with a Town Hall during which attendees could ask anything of Pallasch, Giffin, and Peevey. A reception and a tour of IIBEC’s Raleigh headquarters followed the day’s presentations.

Chapter leaders departed energized, ready to share their knowledge and ideas on how to improve the performance of their chapters in 2023.