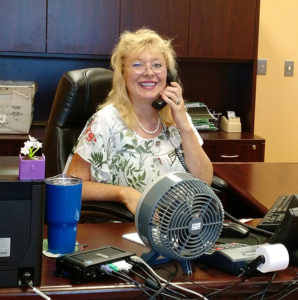 Janice Adams started working at RCI in January as a temporary employee. After a few months, the arrangement was made permanent, and on May 17, 2017, she officially became the new Member Services Specialist. Hers is the first cheerful voice you usually hear if you call RCI HQ in Raleigh. She also does a lot of the mailings and helps Membership Director Alec Jeffries in a variety of capacities.

“I enjoy dealing with all different types of people. My background is heavy in customer service, so I like being on the phone helping customers,” Janice said .

Adams worked for about nine months in a veterinary office in Reston, Virginia, as a reception manager, and before that, spent five years with the Humane Society of Fairfax County as an office manager. Prior to that, she spent 20 years at a company in south Florida. They were a staffing company, so she started out in placement and then worked her way into their information technology department. She was supervisor of a staff of ten, including an overseas staff in India. Her group worked closely with the help desk, doing account management. They had about 20 different systems, and her group maintained things like user IDs and logins, and created accounts and disabled them when people left. She says she really enjoyed that, but when the market crashed in ’08, the company laid a lot of people off, and she was one of the casualties.

“I’ve been [in Raleigh] just over a year, and love it. I was born and raised in Northern Virginia, left there in my late 20s and moved to South Florida, and then came back in 2009 to Northern Virginia. I recently sold our childhood home in Virginia, then moved here. So I’ve been bouncing around a bit, but I plan on staying here for quite awhile.”

She likes the milder winter as compared to the DC area. She also appreciates the slower pace here. She says it’s a beautiful country setting out by where she currently lives, and people are “a lot friendlier” than in the DC area.

Her passion is animal rescue and animal welfare. When she was in south Florida, she worked a part-time weekend job for the Humane Society of Broward County for a year in adoption placement. She liked it so much that when she saw an opening for the Humane Society in Fairfax, she applied and got that job. She plans to get involved with local rescues and do some volunteer work in the Triangle.

Her own fur family is comprised of three rescues: two cats and a dog. They are a snowshoe named Amber, a tuxedo named Smudge, and a maltipoo named Lilly. She’d like to start a blog one day around animals and animal rescue, and try her hand at a rescue calendar.

Adams also really enjoys gardening. She says, “I love to get my hands dirty and even find weeding relaxing.” She likes to read, watch movies, and loves music, especially the blues. She spent a lot of time going to see bands in DC and south Florida, and still loves live music. She was sneaking into clubs in her teens, she says, “just to see the bands.”

Adams enjoys eating out and loves visiting antique and thrift shops searching for that perfect find. She attributes her enjoyment of treasure hunting to the fact that her parents used to own an antique store. Adams’ two older sisters—one in Virginia and one in Maryland–are both married without kids.

She also loves learning about rare gemstones, and has thought about studying to become a gemologist.

Overall, she is enjoying life in Raleigh, and, more specifically, at RCI. She really likes the job and her coworkers, who she says are all very friendly and helpful. She is looking forward to a great future with RCI. 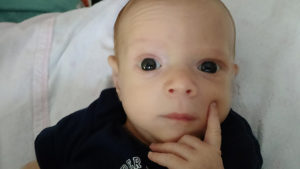 If you attended the 32nd Annual RCI Convention and Trade Show, you may have noticed that one of the RCI staffers looked like she had swallowed a watermelon. Katherine (Katey) Springle Lempka, assistant director of publications for RCI, gave birth to her third son, Samuel, on May 24, 2017. She, dad Jonathan, and older brothers Tristan and Marshall are all thrilled with their new addition. He is a thoughtful little guy, who was 6 and a half pounds and 19 inches long at birth, and is now up to a whopping 9 pounds or so. No, he is not yet sleeping through the night.

Director of Marketing Communications William Myers holds an AAS degree in journalism and a BA degree in public relations and communications from the State University of New York.

He interned at a public zoo and spent a year as a public relations assistant at a community college in upstate New York. He proceeded to be assistant director of Rentavision Advertising, where he earned several regional awards for multimedia, TV and, radio advertising. Myers moved to North Carolina in 1997, and started work at RCI in May of the same year.

He has been RCI’s point person for all things marketing ever since. “I was hired to establish a communications program for RCI. It was a blank slate when I started. It has been rewarding to develop programs that have helped to grow the association,” said Myers.

Ten years ago, he relocated to the Pacific Northwest and switched from being a full-time employee to holding a contract position. From his home office, he directs RCI’s internal and external communications programs including the website, advertising, public relations, trade shows, and mass emails. He is also responsible for the revenue generated through advertising, exhibit sales, and sponsorships.

In his free time, he, his partner Alison, and their two dogs enjoy travel and outdoor pursuits such as climbing, skiing, biking, hiking, and mountaineering.