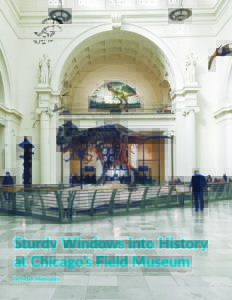 Chicago’s Field Museum of Natural History was incorporated in 1893 with the following stated purpose: “accumulation and dissemination of knowledge, and the preservation and exhibition of objects illustrating art, archaeology, science, and history” (Fig. 1). In 1921, the museum moved from its original location in Jackson Park to its present site on Chicago Park District property at Roosevelt Road and Jean-Baptiste Pointe DuSable Lake Shore Drive. At that location, it is part of a lakefront museum campus that includes the Shedd Aquarium and the Adler Planetarium (Fig. 2).

The window replacement completed in 1987 was done so well that the windows look as good today as they did when they were installed (Fig. 3). They truly fit the monumental nature of that famous structure, and they have so far endured the ravages of Chicago’s Windy City weather without a complaint.

Equally important, they faithfully replicate the original, grandly articulated wooden windows, which were bordered with rich moldings and ornamented with a hub-and-spoke “square wagon wheel” design repeated 440 times across the edifice (Fig. 4). The new window frames and the wagon wheel ornaments were made from long-lasting aluminum.

HOW DID THIS PROJECT COME ABOUT?

We had already completed the installation of a few hundred conventionally designed windows along the top exterior of the building and also at interior light courts. Although we had to exercise care to avoid accidentally disposing of an occasional dinosaur molar or wolverine pelt laying around the many labs and workspaces we rehabbed, those upper windows themselves required no special design features other than excellent insulating value and longevity.

Then Uriel Schlair, an architect with Harry Weese Associates, who designed that window replacement job, asked me to join him in a walk around the outside of the museum with Norm Radtke, the facilities manager. Uriel pointed to the big wood windows, which were peeling and cracking, and simply asked, “What would you do with these?”

At the time, I had only six years of experience in the business, but I already knew that one could create marvelous things from extruded aluminum. So I proposed new frame extrusions that would emulate the big frame moldings (Fig. 5). But what about those square wagon wheels? That is not a shape conducive to the extrusion process. Something different was needed.

Then I remembered my days at Albert G. Lane Technical High School in Chicago and the foundry class taught by Dr. Woodruff. In that class, we literally pounded sand around wooden patterns in special boxes with mating halves then split the halves and removed the pattern. We then rejoined the halves, dug a hole in the sand for a passageway, and poured molten aluminum in the void left by the pattern. The resulting piece of aluminum was the same shape as the wood pattern. Maybe this method could be employed to make the square wagon wheels.

I suggested to the architect that we make the wagon wheels from aluminum castings.

Predictably, his next question was how much it would cost to build a full-sized mock-up of one opening. In my inexperience, I said maybe $5000. Then I went back to the office and crunched the numbers. The real cost was $30,000! To my surprise, the museum bought it.

The mock-up looked great and provided a wonderful learning experience. The design served as a model for the production of a set of bid documents for the replacement of all the windows on the huge building. We were the low bidder and were awarded the contract. The entire contract was only about $1.2 million. These days, it would have been $6 million to $8 million.

The first order of business was to build a full-sized mock-up for testing at Construction Research Laboratory in Miami with A.A. Sakhnovsky. (Fig. 6 and 7). “Sak,” as he was known, was the building enclosure pioneer who opened the very first façade testing lab in 1955. The now commonplace PMU (project-specific mock-up), wherein part of a building is built in a lab and then tested, is Sak’s invention.

The testing included those for air infiltration (ASTM E283), water penetration (ASTM E1105), and structural loading (ASTM E330).1–3 In addition, given a concern about the use of a “shadow-box” panel behind the glass, the lab ran a condensation resistance factor (CRF) test (AAMA 1503).4

In a CRF test, a guarded hot box is placed outside the test specimen. It is alternately filled with liquid nitrogen to chill the specimen and heated with lamps. All the while, thermocouples placed at predetermined points on the interior surfaces are logging data. During the -10°F (-23°C) cold cycle, interior surface temperatures of the window were found to be acceptable. In other words, no condensation would form on the interior window surfaces under design conditions.

However, the real question could not be answered by the CRF test — namely, did condensation form between the glass and the shadow-box panel?

To ascertain the answer, I held my breath and plunged into the cold darkness of the nitrogen-filled box. With flashlight and video camera, I crept inside and peered through the glass, looking for condensation behind it.

None! A hermetic seal between the insulated glass unit and the shadow-box panel was effective.

At the end of the testing, for no other reason than the boyish enjoyment of seeing something explode, we “pushed” the structural overload test, which normally applies 150% of the design pressure to the test specimen to destruction.

The various processes required to prepare the castings for final presentation were one of the biggest concerns in the preparation of the job for production. The castings needed to have rough edges ground off, and then they were sandblasted (Fig. 8).

Before the castings were painted, they were baked for eight hours to allow all entrained gasses to “outgas.” This prevented bubbling in the paint finish. The polyvinylidene fluoride-based paint finish was then applied and baked on at more than 400°F (200°C).

Finally, the actual work began. Boom lifts, trucks, and dumpsters all over the building contributed to the establishment and maintenance of a productive pace of work. The square wagon wheels were mounted in front of the glass and were hinged to allow for cleaning of the glass.

I had an extra one made, and it hangs in my garage to this day.

The windows have proven a valuable part of the enclosure, providing aesthetics and functionality.

Proof of their functionality is supported by the fact that in the 35 years since, we have never received a single service call.