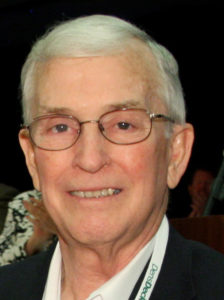 Donald E. Bush Sr., FRCI, died Dec. 28, 2016, at the age of 78. Born in Ohio, he joined RCI in 1984, in its infancy, and became its treasurer in 1988 and its president in 1991. He was chairman of the RCI Nondestructive Testing Committee, longtime chair of the RRC Exam Development Subcommittee, and had been director of the original Region III of RCI.

In 1988, he became RCI’s first Registered Roof Consultant (#0001). He was named an Outstanding Volunteer for RCI more than once, including the Michael DeFrancesco Volunteer of the Year in 2009, and received the coveted Herbert Busching Award in 2004. Bush earned a bachelor’s degree in construction technology. He was retired from the U.S. Army Corps of Engineers, having spent 23 years in the corps and serving as principal investigating officer for roofing failures throughout the Far East.

I met Don Bush in 1984. When I found that he was a retired U.S. Army Corps of Engineer colonel, that was about all I needed to know, as I had also served in the Corps. Don brought to RCI many years of experience in the military in both combat and civilian construction. My first impression of Don was that he was a true gentleman, as of course all officers in the U.S. Army are supposed to be. He was.

Early on, Don was very interested in the RCI certification process, as we called it then. I seldom saw Don when he was not smiling. I think it was Zig Ziegler who said, “A smile is your greatest social asset.” That works pretty well in the professional world, also.

Don had Certified Roof Consultant No. 001. Alphabetically, “Bush” comes before “Canon”. So while he will always be number one, I can never be better than number two. After Don, that ain’t too bad.

You go work on those pearly gates and golden roads, dear friend. I miss you. See you there.

In 1979, he entered into roof consulting, forming D.E. Bush & Associates, Inc., and was a Construction Document Technologist with CSI. The next year, he became president of Illinois Roof Consulting Assoc., Inc. Ultimately, he was owner of Moisture Control Technologies Inc., in Volo, Illinois. He is survived by four children: Don Jr., John Sr., Kerri, and Tammy; as well as nine grandchildren and ten great-grandchildren. His wife, Carol, predeceased him in 2015.

Don was a good friend and a great help to me while I served on the Board of Directors of RCI. He didn’t say a lot and his words were always spoken softly, but you learned to always listen carefully to what he had to say. He was one of those rare individuals who always thought before he spoke. I was honored to serve along with Don and will always treasure the memories. – Sam Huff
Don was a constant force within the RCI Inc. community, and I thank him and remember him fondly for this. – Jean-Guy Levaque
Don was a good man and a good friend. I worked with him on several occasions, most notably the RRC Exam Development Subcommittee. He knew how to keep folks on point and working together. I will miss him. – Nelson Hall, RRC, FRCI
I served with Don for many years. The first thing I want to tell you is a wee bit about Don. He was a military trained gentleman. He had had extensive business experience in the private sector, but overall it was all about character. He was a magnificent man of character and integrity. He led RCI as an executive committee member and especially as our president. He always had his chin up, and was looking forward for what was good for the institute, and good for the industry overall. – Joe Hale
Don Bush Sr. is one of the greatest men I’ve ever come to know. Other than being a great uncle, he is responsible for giving me my first job in the roofing industry. His knowledge and guidance have provided the quality of life that my family and I enjoy to this day. Don’s intelligence, insight, work ethic, compassion, kindness, and love of country are only some of the characteristics that made him the larger-than-life figure I looked up to and still do. Don was a strong family man and few have done more for their families than he. My uncle was also a humble and private man who never brought attention to himself. A great example of Don’s unassuming personality was when I found out after his passing that he was a Purple Heart recipient. We all know of his commitment and contributions to RCI- yet another passion he excelled in following the military. Don’s legacy of selfless accomplishment is one to be very proud of and one the Bush family will always cherish. After living life to its fullest, Uncle Don has joined Aunt Carol, and now there’s a new power couple in heaven. What a great life they shared. God bless. – Tim Bush, RRO
Memories are golden these days. I have two of Don Bush. The first is very recent and very clear – Don’s lifelong commitment to volunteer service to RCI and the roofing communities and his very real and substantial contributions to the success and status in the industry RCI enjoys today. The second memory is more hazy and dates from the early years of RCI when I first met and worked with Don. It is a memory of a personal quality that Don possessed that contributed mightily to his ability to lead and accomplish the things he did for RCI. It might surprise some (or maybe not) if I say that RCI in the early years occasionally experienced brief periods of strife and turmoil. This memory is of Don’s cool-hand approach to his relationships in the roofing communities. Don could always be relied upon to hear all sides of an issue, make a reasoned (and seasoned) judgement, and give a well-thought-out response. His actions were always respectful of all sides of issues and courteous to all concerned. He was, to me, always and above all, a gentleman. I grieve Don’s passing, and my prayers go out for his family. But I celebrate his life of service to our country, RCI, and the roofing communities. Well done and RIP, Don. – Bob Phillips
I was blessed to work with Don. Don was always one kind deed ahead of you. It seemed difficult to find a way to pay Don back. We will never be even, but since I get the last chance, as a token of appreciation and remembrance, I will be making a donation to the RCI Foundation in your honor. Because I know your friend who passed before you, Bob Lyons, would want to honor you in some way, I am matching that donation on his behalf. Perhaps, also, the least he would do for you. Good men do good deeds. – David R. Hawn