By Jim Leslie and Kevin Smith

This article is also available in audio format as a podcast. Search your favorite podcast app for “IIBEC,” visit https://anchor.fm/iibec, or listen right here in your browser.

Wind-driven kinetic façade systems often are constructed of hundreds or thousands of moving parts to provide the intentional dynamic effect for a building enclosure or structure. Responding to air currents, the flapper panel design creates the look of rolling waves across the wall. Designed to attract attention, these systems typically are installed on buildings in dense, urban areas. Along with creating visual interest with their movement, all kinetic installations can produce some level of ambient sound under higher wind conditions (Figure 1).

Manufacturers can engineer and fabricate kinetic façade systems with spacers between the flappers to reduce the collateral noise. While aluminum is the most popular material for flappers, other options include perforated materials, stainless steel, polycarbonate, polytetrafluoroethylene (PTFE), acrylic, and even polyvinylidene fluoride (PVDF) films (Figure 2). The construction material, suspension system, and flapper geometry can be adjusted to ensure that the level, tone, and timbre of the resulting sound is acceptable.

The volume and quality of sound generated by a kinetic façade installation should be considered as early as possible in the design and specification process. Sound levels can be verified with full-scale mockups to ensure that the wind-driven façade systems are within acceptable levels.

Be aware that dB and dBA measurements are logarithmic rather than linear. This has implications for interpreting perceived loudness and comparing levels and perceived loudness differences. For every 10 dBA change in the sound pressure level, the perceived loudness changes by a factor of two. For instance, a 10-dBA increase in level will sound twice as loud to the average listener, and a 10-dBA decrease will sound half as loud. A 20-dBA change thus corresponds to an increase/decrease in loudness by a factor of four—four times louder or one-quarter as loud. A 3-dBA change is the smallest change perceptible to a listener with normal/average hearing.

Many municipalities have ordinances that prohibit unnecessary, excessive, and annoying noises. These noises include those emanating from within buildings, and also can include sounds generated by constructing or operating the structures themselves.

For example, the Minneapolis city ordinance states: “Excessive noise degrades the environment to a degree that [it]:

In Minneapolis, “Regulating noise should and does take into account the time, place, and manner of such noise.” In practice, this becomes  complicated, because different times and noise levels are permitted, depending on the source of the sound and the noise-generating activity’s purpose.

As another example, the noise ordinance for Los Angeles categorizes the city into four major zones and, depending on the typical activity level in each zone, assumes an ambient 7 a.m. to 10 p.m. daytime noise level of 50-65 dBA for sounds within a residence or within 500 feet of a residence. The acceptable nighttime ambient level is reduced by approximately 5-10 dBA between 10 p.m. and 7 a.m.1

Furthermore, the Los Angeles ordinance states that noise in any place of public entertainment at a sound level greater than 95 dBA is unlawful unless there is signage placed outside and near each public entrance, stating: “Warning: Sound levels within may cause hearing impairment.”

Local noise ordinances also may provide rules and exceptions for hospitals, schools, places of worship, and commercial business districts. In addition, state and federal guidelines may take priority for emergency work or for regulated industries, vehicles, and properties such as train whistles and airports.

Violations may be subject to fines or other punitive actions. In Los Angeles, and similarly, in other municipalities, law enforcement may determine whether a violation has occurred based on factors including, but not limited to:

To provide a basis for state and local governments’ judgments in setting standards, the U.S. Environmental Protection Agency (EPA) identifies:

…a 24-hour exposure level of 70 dB as the level of environmental noise, which will prevent any measurable hearing loss over a lifetime. Likewise, levels of 55 dB outdoors and 45 dB indoors are identified as preventing activity interference and annoyance. These levels of noise are considered those which will permit spoken conversation and other activities, such as sleeping, working, and recreation, which are part of the daily human condition.2

Even with the EPA-stated 70-dB safe level, other U.S. regulations and guidelines vary on acceptable noise levels and duration.

Regardless of whether the source is inside, outside, or as a result of a building structure, unwanted sounds quickly can become perceived as noise. Sustained, loud, or high frequency noises are proven to have negative consequences on human health.

The U.S. Department of Health and Human Services’ National Institutes of Health (NIH) and the National Institute on Deafness and Other Communication Disorders (NIDCD) cautions, “Sounds can be harmful when they are too loud, even for a brief time, or when they are both loud and long-lasting. These sounds can damage sensitive structures in the inner ear and cause noise-induced hearing loss (NIHL).”6

Humans perceive noise by converting sound waves in the air into electrical signals that register in the brain. Sound waves enter through the outer ear and travel through the ear canal, causing the eardrum to vibrate. Three tiny bones in the middle ear convert the sound vibrations from air to fluid vibrations in the cochlea of the inner ear.

NIDCD explains that most NIHL is caused by the damage and eventual death of stereocilia—microscopic hair-like projections in the inner ear:

Once the vibrations cause the fluid inside the cochlea to ripple, a traveling wave forms along the basilar membrane. Hair cells – sensory cells sitting on top of the basilar membrane – ride the wave. …The stereocilia that perch on top of the hair cells bump against an overlying structure and bend. Bending causes pore-like channels, which are at the tips of the stereocilia, to open up. When that happens, chemicals rush into the cell, creating an electrical signal. The auditory nerve carries this electrical signal to the brain, which translates it into a sound that we recognize and understand.7

“The louder the sound, the shorter the amount of time it takes for NIHL to happen,” concludes NIDCD.

As of January 2020, no available research could be located that effectively recorded the sound levels generated by wind-driven kinetic façade systems.

EXTECH/Exterior Technologies, Inc. commissioned an acoustical study to model and predict the sound that would be emitted by a pin-mounted, wind-driven façade system installation in the areas surrounding the building structure. The study would assess the sound relative to objective levels and limits as compared to applicable noise ordinance and regulations, and to subjective human perception of what a nearby listener would hear.

A physical test unit was constructed to evaluate a kinetic façade system’s structural dynamic behavior, and to measure the sound generated by wind-induced motion of its flappers and its support structures (Figure 5). This test unit consisted of:

Figure 6 – A pin-mount suspension on a wind-driven kinetic façade system allows the flapper elements to seemingly float in front of the support rungs and side rails as a veil.

A pin-mount suspension on a wind-driven façade system allows the flapper elements to seemingly float in front of the support rungs and side rails as a veil (Figure 6). This configuration minimizes the appearance of the supporting structure and makes it convenient to create innovative aesthetic designs by mixing flapper shapes to create geometric patterns. This type of suspension also makes installation possible at various mounting points, facilitating changes in kinetic activity. Pin-mount suspension systems allow the flappers to be removed and replaced without any specialized tools if repair or maintenance is needed (Figure 7).

The test unit was installed in a large open field in a high-wind area of rural western Pennsylvania (Figure 8). This location was selected due to its minimal extraneous ambient noise sources, reducing the potential for background noise to contaminate the study. The test unit was exposed to varying wind conditions, and the wind-induced sound was measured and correlated with the wind parameters.

Figure 9 – The data collected from the wind-driven kinetic façade test unit were then applied to a larger, wind-driven façade model on a full-scale building elevation.

For the quietest predicted sound level of 35 dBA, a person would need to stand 100 feet from the building with a 5-mph wind blowing. This would be the equivalent of hearing a soft voice at a distance of 5 feet.

For the loudest predicted sound level of 62 dBA, a person would need to stand immediately in front of the building (0.0 ft.) with a 25-mph wind blowing the kinetic façade system. This “noise” would be the equivalent of hearing a conversation at a distance of 3 ft. (Figure 10).9

Research shows that installed in an urban setting, a city’s ambient noise further masks the sounds produced by a building façade. Current examples of wind-driven façade installations can be seen on airports, downtown offices, sports stadiums and event centers, high-end retail stores, museums, and parking garages. In these applications, noise from vehicle traffic, aircraft, performances, and energetic visitors help negate the sound produced from the kinetic system itself.

In addition to the location-specific noises of a kinetic wall installation, the wind inducing the flapper panels to create the system’s dynamic visual effect also will generate ambient sound. In many cases, the wind itself will be loud enough to mask the sound level of the façade system.

This acoustic study also verifies that the perceived sound levels of this type of wind-driven kinetic façade are highly unlikely to be of concern to applicable noise ordinances and regulations.

In conclusion, remember to consider the volume and quality of sound generated by a kinetic façade installation as early as possible in the project’s design and material selection process. If necessary, verify sound levels and tonal quality on an individual project with a full-scale mock-up.

Given the complexity of kinetic façade systems, seek an experienced designer and manufacturer to participate early in the project’s design. Look for one offering preliminary cost estimating, mock-ups, and a variety of fabrication and installation options to meet each project’s functional and aesthetic requirements. 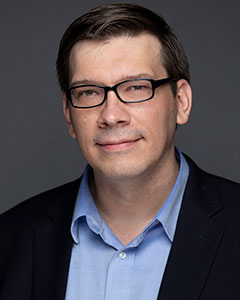 Jim Leslie is the general manager of EXTECH/Exterior Technologies, Inc., in Pittsburgh, PA. He and his team redefine the intersection between the natural and built environments with wall, window, skylight, canopy, and custom systems, such as dynamic façade designs. Leslie has a bachelor of science in mathematics from Penn State University and is a member of the American Production and Inventory Control Society (APICS). He may be reached at jleslie@extechinc.com. 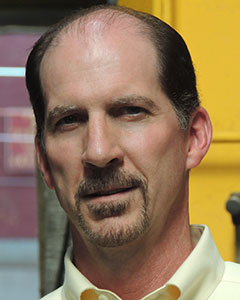 Kevin Smith is a registered architect and leads EXTECH’s team of architects and engineers as director of product application and development. He brings more than three decades of experience in designing commercial, civil, industrial, and transportation projects, as well as daylighting and static and kinetic façades. He earned a bachelor of architecture degree from Carnegie Mellon University. Smith may be reached at ksmith@extechinc.com.