Buildings Harnessing the Power of Algae

Back To News
July 2, 2018
Perhaps a decade or two from now, RCI will offer a class on bio-building of the building envelope. If that happens, algae-powered structures may be a unit of that class.

In 2013, engineering firm Arup built the first “bio-adaptive façade” on an apartment building in Hamburg, Germany as part of the International Building Exhibition. Called the Bio Intelligent Quotient house, the building uses live microalgae growing in glass louvres to generate renewable energy and provide shade. It is covered with 129 algae-filled glass bioreactors. Once a week, the algae is harvested and converted to biofuel. 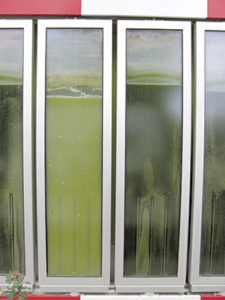 See more on that project in the videos at the end of this article.

In 2015, London-based ecoLogicStudio created the Urban Algae Folly, a gazebo made of ethylene tetrafluoroethylene (ETFE) whose interior was filled with water and spirulina (a type of algae used as a dietary supplement). It was constructed as part of the Future Food District at EXPO Milano. (See more about Algae Folly v2.0.)