At METALCON, the largest international event for the metal construction industry, sponsored by the Metal Construction Association (MCA), teams of metal roofing construction experts compete in construction challenges. This year, the Battle Stars over Baltimore was held at Baltimore Convention Center October 26-27. In the two-day competition, five teams with two contestants each competed to split $5,000. Each battle took 15 to 30 minutes and required speed and accuracy to win. Contests
included: 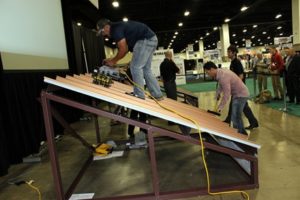 Judging was provided by the Metal Building Contractors and Erectors Association (MBCEA).

Don’t Get Blindsided by Below-Grade Leaks.

Blindside or pre-applied waterproofing is one of the most complex building enclosure systems to design and construct in a watertight condition. During design, consultants must consider the geotechnical report, support of excavation systems, and many complex details that are possible in hydrostatic conditions. Learners are provided with solutions to design blindside waterproofing system to maintain a dry foundation and provide the building owner with a valuable warranty.

Moisture within a roof is detrimental to the energy efficiency and long-term performance of the roof system. This webinar will provide a basic understanding of today’s leak-detection equipment options, methods of roof moisture detection, and critical components of a detailed moisture survey report. We will also discuss methods of assessment and verification as well as when moisture surveys are critical to a project’s success.