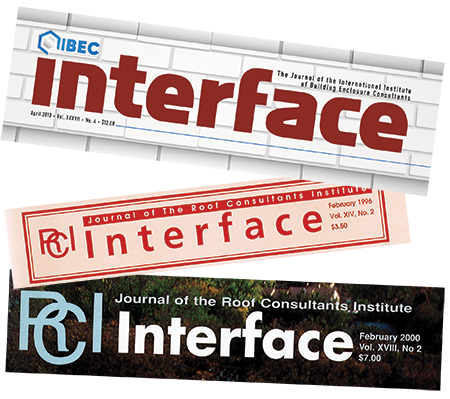 You are now reading articles from the first issue of IIBEC Interface: the Journal of the International Institute of Building Enclosure Consultants. We have a new masthead, a new logo, and a new name.

Our institute and our journal have come a long way. Originally incorporated in 1983 as the Roof Consultants Institute (RCI), the association’s first newsletter was launched shortly thereafter. It was composed on the typewriter of its first executive director, William C. Correll, then mimeographed on an 8.5 x 17-in. piece of paper folded in two and mailed to a small but passionately engaged audience. As Correll wrote:

September 15, 1983. The results of Phillips’ investigation of getting a publishing house to publish an R.C.I. magazine were not good. The cost was “pie-in-the-sky” out of our budget. I discussed the matter with Lyons and proposed to develop an in-house newsletter. …I had been thinking about a newsletter format, design and name for more than a month. The name was the tough part. After agonizing over a list of names, some catchy and sophomoric, I came to the happy conclusion that the name, INTERFACE, should most appropriately project R.C.I.’s common goals for consultants, industry, owners, and education. I immediately began assembling a sample copy and Phillips ran the contents per format on his computer. …The sample of the “INTERFACE Newsletter” was unanimously approved and it was determined that 500 copies would be printed and mailed the first week in October 1983. 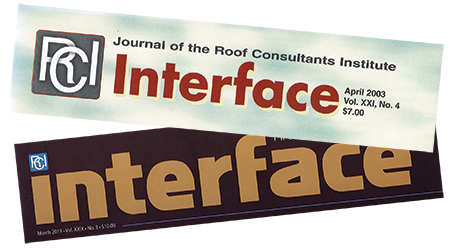 Thirty-seven years later, with approximately 10,000 monthly readers worldwide, Interface pledges to continue to deliver quality articles and informative industry news. Our goal remains to bridge the gap between the seemingly disparate elements of the entire building enclosure community, connecting these elements, educating and informing about related topics, establishing a common ground for discussion, promoting association programs, and reaching out to the industry at large. 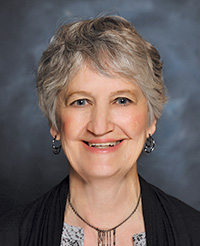 The cover of this issue introduces IIBEC’s new logo, replacing the familiar RCI logo as we look forward to the next chapter of our institute’s history.

One response to “Welcome to IIBEC Interface”