Editor’s Note: Although this article focuses on condensation related to cool roofs, it is acknowledged that condensation can occur in any type of roof system when the air comes in contact with a surface that is below the applicable dew-point temperature.

On a cold morning in October, I was standing on a newly completed roof re-cover in the Colorado Front Range area and listening to the membrane crunch under my feet. The building owner had recently had a mechanically fastened cool-roof re-cover installed on the roof, and we had received a call when they discovered that it was apparently leaking. I pointed to the spot under my feet and stood back to let the roofer make a cut in the membrane. As soon as I saw the ice droplets on the back of the membrane, all I could think was, “Not again.”

Cool-roofing mandates are cropping up all over the United States, and they’re rapidly changing the landscape of how we building enclosure professionals do our jobs. These mandates require that cool-roof membranes—which are typically defined as roof membranes with comparatively high reflectivity—be installed on roofs. Potential benefits of cool roofs in lieu of dark-colored membranes include improved energy performance for buildings, reduction of air temperatures in cities (the urban-heat-island effect), and reduction of air pollutants. These potential benefits have led to the growing popularity of cool roofs and are likely to lead to more mandates in the future.

Denver passed their Green Buildings Ordinance in late 2018. This ordinance includes a cool-roof mandate for all new roofs, roof replacements, and roof re-covers of most commercial buildings over 25,000 sq. ft. Denver’s holistic approach to the cool-roof mandate treads new ground above and beyond the model code requirements and could serve as a basis for future, similar cool-roof mandates in other heating-based climates.

While the reasons Denver’s cool-roof mandate was implemented are noble, the development of the provisions surrounding this mandate gave in-the-know Denver building enclosure professionals some substantial heartburn. Why? As usual, it all comes down to water.

Regardless of time of year or weather conditions, it is common for light-colored membranes to be at or only slightly above ambient temperature due to the reflectivity of the membrane. As a result, cool-roof membranes do not experience the same solar-based heating as dark-colored membranes. In heating-based climates, roof membranes and/or substrate components can be at or below the dew point compared to interior conditions in the winter months. This can lead to condensation within the roofing assembly or on the roof deck, which can cause deterioration of the roofing system.

With dark-colored roof membranes, the membrane itself can assist with managing this potential condensation. Because the dark-colored membrane absorbs more solar heat during the day, it will in turn heat the overall system. This both raises the system components above the potential dew point, reducing the general condensation risk, and can promote self-drying of the roof. Therefore, cool-roofing membrane systems can experience condensation-related damage that a similar system with a dark-colored membrane may not experience. This is particularly true in roofing systems with the insulation below the roof deck, and with split insulation systems (where there is some insulation both below and above the deck). This concept has been proven both in hygrothermal computer-based models which compare varying membrane colors (Fig. 1) and via project experience.

This author has observed numerous projects where cool-roof-related condensation has resulted in substantial damage to the roofing system and/or structure in a single winter season. Damages can include water forming under the roof membrane (Fig. 2), deterioration and microbial/biological growth within the roofing assembly (Fig. 3), or condensation moisture on the roof deck and associated deterioration (Fig. 4 and 5). 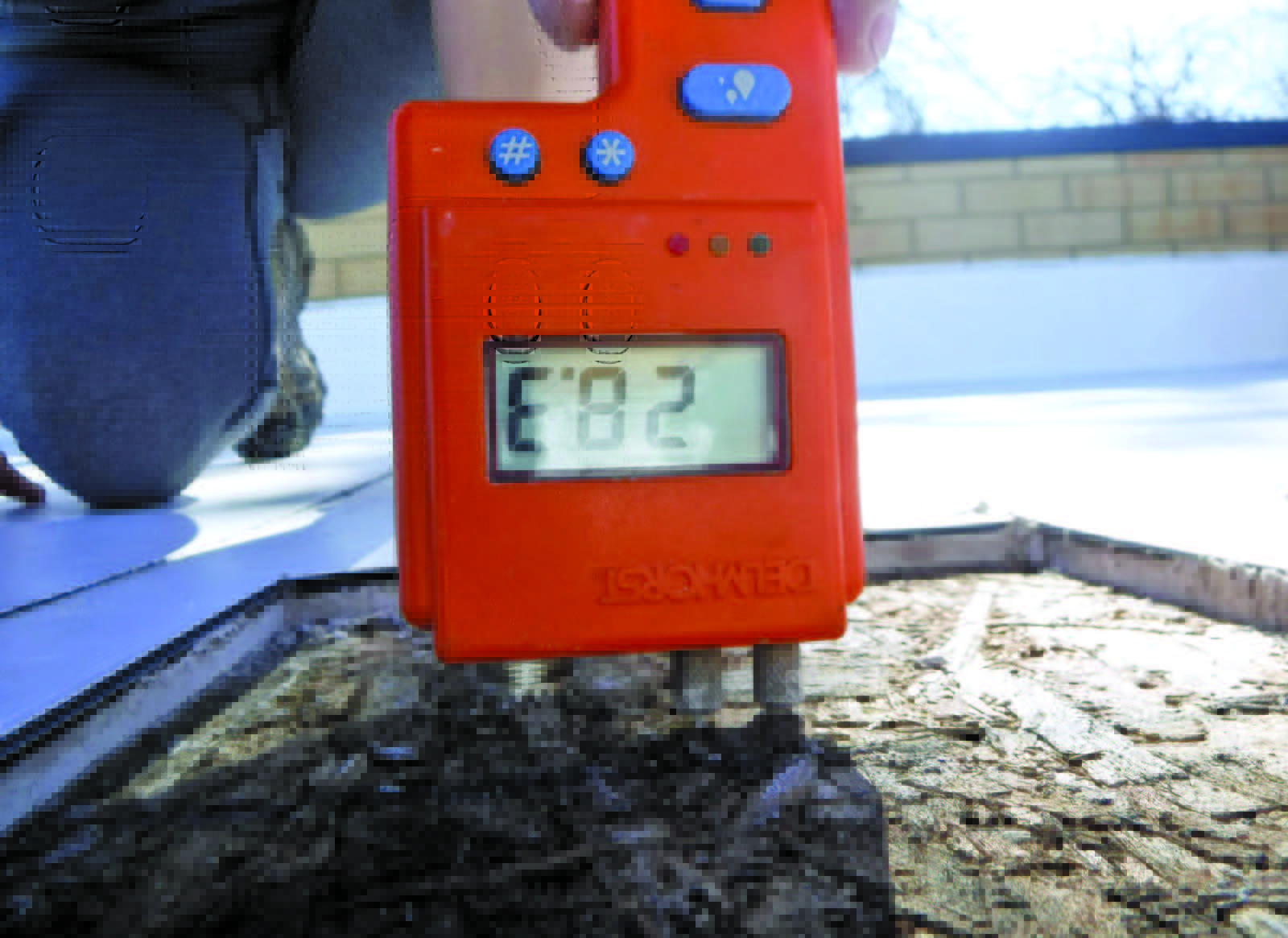 Figure 4. Measuring condensation-related moisture in the roof deck at a cool-roof assembly with below-deck roof insulation in Colorado. This roof was replaced approximately two years prior to this photograph being taken.

The first line of defense against commercial roof system condensation in the codes is the ventilation provisions required in Section 1202.2 of the IBC, or providing an appropriate unventilated roofing assembly as required by Section 1202.3 of the IBC. However,the ventilation provisions of Section 1202.2 and unventilated roofing assembly requirements of Section 1202.3 can be difficult to retrofit on low-slope roofing assemblies in roof re-cover and roof replacement situations. This is particularly true on “hot” roof assemblies, where the roof sheathing and ceiling finishes are directly applied to the roof rafters. To adequately vent this roof structural assembly, each rafter cavity would require ventilation, and continuous roof vents are not generally available for membrane roofs. In addition, many authorities having jurisdiction do not enforce ventilation requirements for roof re-covers and roof replacements. Therefore, ventilation may not be a suitable solution to cool-roof-related condensation on low-slope roofs.

Where ventilation is not practical and the existing assembly does not comply with the requirements for a non-ventilated attic/rafter space, most assume that the insulation requirements of the IECC will manage the condensation risk for cool roofs. However, this is a misconception for all roof re-covers, and for roof replacements on buildings with below-deck insulation. In general, roof re-covers have been exempt from the IECC since the inception of the code, which is relatively well known despite not being made fully explicit

until the 2015 version of the code. However, the provisions surrounding roof replacement have been more difficult to understand.

The 2015 and newer versions of the IECC made this much clearer. The requirement was moved to the newly created Chapter 5 of the IECC, which addresses existing buildings. In the 2015 IECC, Section 503.3.1 states, “Roof replacements shall comply with Section C402.1.3, C402.1.4, C402.1.5 or C407 where the existing roof assembly is part of the building thermal envelope and contains insulation entirely above the roof deck [Emphasis added].”2 This provision clearly indicates that the requirement for compliance with the IECC only applies to existing roofs with above-deck insulation, thereby excluding roofs with below-deck insulation. It is of particular note that this code provision does not specify a minimum-required below-deck insulative value to qualify for this exemption and does not address the possibility that the reroof may result in a “split” insulation system if above-deck insulation is used to provide additional slope during a roof replacement.

Finally, as both roof replacements and re-covers are projects on existing buildings, it would be logical to assume that the IEBC may have provisions that specifically address the condensation risks of cool-roof assemblies. The IEBC first began addressing roofing replacements and re-covers in the 2015 version of the code, where Section 705.1 of the IEBC states, “Materials and methods of application used for recovering [sic] or replacing an existing roof covering shall comply with the requirements of Chapter 15 of the International Building Code.”3 This same language was also utilized in the 2018 IEBC. Therefore, regarding re-covers and roof replacements, the IEBC does not provide additional guidance beyond the provisions of the IBC and IECC.

The provisions of the existing model codes therefore leave roof replacements and re-covers susceptible to potential cool-roof-related condensation damage, particularly on roofs with existing below-deck insulation. The potential for “split” insulation systems, the difficulties of ventilation or retrofitting non-ventilated attic/rafter spaces on existing low-slope roof structures, and the lack of provisions for re-covers in the model codes are all items that need to be addressed as a part of cool-roof mandates to protect buildings from condensation-related damage.

As condensation can have serious consequences for buildings, the committee that defined cool roofs for Denver’s ordinance took care to specifically address this issue. Several industry professionals, including building enclosure consultants and manufacturers, gave input into Denver’s provisions, which ultimately led to a flexible solution to cool-roof-related condensation. In general, Denver took two approaches to cool roof-related condensation, which mirrored typical code options: prescriptive and performance-based.

For low-sloped roofs, the prescriptive-based approach specifies a required roofing system that includes an air/vapor retarder, which must be installed at the interior side of the above-deck insulation. This above-deck insulation must either comply with the requirements of the currently adopted IECC or must provide an R-value equal to the R-value of the below-deck insulation plus R-18, whichever is greater. The performance-based approach requires that a dew point/hygrothermal analysis be performed on the roofing assembly by a professional engineer, registered architect, or professional roof consultant.

Both approaches seek to provide an assembly that ensures the roof deck remains above the dew point, and that the roofing assembly is properly designed to resist condensation. One of these compliance methods is required for each cool roof installed in Denver under the ordinance, including roof replacements, roof re-covers, and new-construction roofs.

The provisions enacted in Denver have been in place for over a year as of the writing of this article. While there was initial resistance to the provisions as the community gained familiarity with them, it has become commonplace in the market at this point. The flexibility of the provisions has allowed successful adaptation to existing buildings, both for re-covers and reroofs, as well as to new construction. It has been this author’s experience that several projects which would have otherwise been prone to cool-roof-related condensation have altered their planned roofing assembly based on the provisions of Denver’s Green Buildings Ordinance and have installed systems designed to resist condensation.

As the industry continues to evolve, we must not forget the basic principles of what makes a good roof. Ultimately, a holistic approach that remembers the roof is a system, not just a membrane, is required. Regardless of roofing covering color or content, a properly performing roofing system can be implemented on any building. Writing of our codes and provisions with that in mind, as was done in Denver, provides a framework for this process which can benefit the entire building industry.

Kade Gromowski is a senior engineer with the Facilities Department in Terracon’s Denver, Colorado, office. After graduating from Pennsylvania State University with a bachelor’s and master’s degrees in architectural engineering, Gromowski began her building repair/restoration consulting career in Houston before relocating to the Denver area in 2014. She has worked on hundreds of projects involving the assessment and repair of roofing systems (steep-slope and low-slope), wall claddings, waterproofing, plazas, and building enclosure testing and diagnostics. In addition, Gromowski has worked on numerous projects involving the structural assessment, restoration, repair, and rehabilitation of a wide variety of building types.