Setting the Stage of Uncertainty

Consider a nine-story high-rise multi-unit residential property constructed circa 1990 with a failing concrete brick façade. Due to areas of brick cracking and walls out of plumb, the owner had originally engaged a contractor to perform retrofit helical brick tie installation. For a variety of reasons—including escalating costs—the work was halted with only about 25% of the work complete.

Among our challenges would be confirming the extent and sufficiency of repair work already completed, and developing and implementing an effective retrofit solution for the fa&cceilade. These challenges needed to be addressed in an environment of relative uncertainty, as is the case with existing buildings. The focus of this article will be on the design and implementation of repairs, including those related to concealed conditions.

Wall areas with steel stud backup were designed with wire-and-plate-style ties (also referred to as unit ties). These ties consist of a steel plate connected to the steel stud backup, with a slotted connection protruding through the exterior sheathing to accommodate the wire tie, which is embedded in mortar (Figure 1). The existing tie spacing was 16 in. horizontally by 24 in. vertically. The horizontal spacing is consistent with interior metal stud spacing.

At over 50% of the locations reviewed, wire ties were installed backwards, relying only on the back-turned leg of the tie to provide lateral support (Figure 2). Furthermore, we uncovered disconnected plate connections at steel stud backups (Figure 3) at 12% of interior test openings performed.


At areas with cast-in-place concrete backup, dovetail-style brick ties were installed (Figure 4), but similar to the wire-and-plate ties, there were issues with the original installation. The dovetail tie spacing was inconsistent in both the horizontal and vertical directions. The dovetail ties are installed in vertical metal tracks that are cast into the wall structure. During our review, we discovered track spacing varying from 19 to 26 in. horizontally, and vertical tie spacing varying from 12 to over 50 in.
Based on loading calculations, it was determined that the inconsistent tie installation dictated that the existing system could not be reasonably relied upon.

Lateral support would be re-established with new stainless steel retrofit helical brick ties at both steel stud and concrete backup. These ties are installed by first pre-drilling a pilot hole through the mortar joint and backup (Figure 5), then drilling the helical tie through the mortar joint and into the backup structure (Figure 6). A small mortar joint repair to conceal the tie completes the installation. Suitability of this application was established through pullout testing throughout the installation process to ensure adequate lateral support at the façade.

In addition to the lateral support concerns, our review uncovered issues related to excessive brick overhang at shelf angles. Steel shelf angles are installed at building floor slab edges. Each angle supports one story of the brick façade, and there should be engineered joints—a gap between the angle and brick sealed with a flexible sealant—at the top of each brick panel to accommodate movement. In many areas, bricks had been installed beyond the toe of the shelf angle so far that the engineered joint was instead filled with mortar to provide support to the brick above. Of course, this use of mortar also facilitated load transfer to the shelf angles below, resulting in possible overloading concerns. It’s important to note that the brick installation was an original construction defect, and that we did not observe major signs of structural distress that would indicate immediate safety concerns or risk of sudden movement.


We carried out structural analysis of the existing shelf angle systems and confirmed that two stories of masonry could be safely supported by one shelf angle. This allowed for a significant reduction (approximately 25%) in quantity of required repairs without compromise of façade stability or safety. Additionally, this change resulted in a proportional cost savings for the owner.

Where repairs were required, shelf angles were extended and reinforced in place with welded steel extension and stiffener plates, custom-sized based on the repair location and existing overhang (Figure 9). Stiffener plate spacing was designed to accommodate existing brick coursing. Repaired shelf angles were then waterproofed, and bricks were reinstated (Figure 10).

During repair implementation, we uncovered a previously unforeseen condition related to shelf angle securement. At cast-in-place concrete backup wall areas, shelf angles were secured to the structure with T-slot bolts and washers/nuts. This method of shelf angle securement was not uncovered during the limited initial review, nor was it identified on the original construction drawings provided. As a result, we did not expect to uncover these bolted connections while conducting repairs.

Consistent with the workmanship from original building construction previously described, the shelf angles appeared to have been crudely modified on site during installation to accommodate bolt locations and masonry coursing. These modifications required repair, since they resulted in bolt slots that were oversized or too close to the edges of the shelf angle.

At areas with oversized bolt slots, the existing washers were not making full contact with the shelf angle around the bolt slots (Figure 11). ortunately, we were able to back off the existing nuts to provide a new, larger washer (Figure 12).


Additionally, some shelf angle modifications included full (or near full) removal of the vertical leg of the angle to accommodate bolt placement (Figure 13). These locations were repaired by providing a new welded steel plate above the vertical leg of the shelf angle, restoring adequate edge distance (Figure 14).
Shelf angle repairs also included installation of new bolt anchors where existing bolts were damaged and could not be reused, and the addition of new shelf angles between angles with excessive unsupported distances. These localized shelf angle repairs safely eliminated the need for full shelf angle replacement—again resulting in a cost savings for the owner.

Don’t Forget About the Owner

Existing buildings are all unique in design, construction, and performance. Owners are also unique and require a customized approach and accommodations to ensure smooth project delivery. In this case, the owner included multiple non-specialist stakeholders with a high level of interest in project cost and progress.

Existing buildings are not always beautiful in design or architecture, but there can be an elegance in design and project implementation that will often define project success, as it did here. 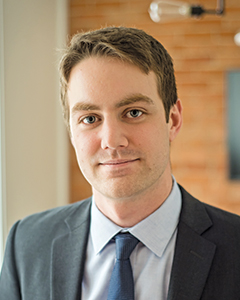 Stefan Nespoli, PEng, is a project manager with Edison Engineers Inc., based in Ontario, Canada. He has a technical background in construction, contract administration, engineering design, and technical reporting for existing buildings. His experience covers all typical aspects of building enclosure repairs, structural restoration, and capital planning. Nespoli’s focus remains on working with clients to develop and implement repair strategies that align with their objectives and financial constraints.

One response to “Façade Stabilization: Expect the Unexpected”