Gene Keeton is president of KDENT, located in Monett, MO. Keeton describes KDENT as a company that specializes in the building enclosure, focusing on continuity, compatibility, and constructability, so that the building does not leak. 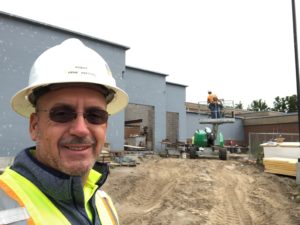 He is a CxP+BE (Commissioning service provider with Building Enclosure emphasis through the University of Wisconsin). He is also starting a new company called C3 Mastermind, LLC, to teach individuals the techniques and tactics he has used for the past 20 years to design and build better building enclosures.

How did you get involved with IIBEC?

I joined in 2011. I became a member because I was looking for information on the building enclosure, specifically, roofing. I was not very knowledgeable about roofing systems, and I found RCI (now IIBEC). I went to my first training courses in Chicago. I was actually a member of RCI for three years before I found out there was a Mid-America Chapter. I was at the 2014 Convention and Trade Show in Anaheim when I found out about the chapter. 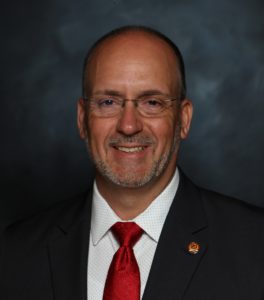 Tell me about your day-to-day schedule.

Typically, my day revolves around one of five things:

What is your favorite part of your job?

Design work. I enjoy coming up with workable designs for a building enclosure. My crowning achievement to date is a combination of 15 years of work on a complex of buildings. The first project I worked on was the initial building of the complex at the University of Iowa, in 2000. In 2015, I completed the third building. It was a $100 million project: a 250,000-sq.-ft. biomedical research building with a 33,000-sq.-ft. vivarium underground, five custom curtainwall systems, and three different cladding systems. On the last building, I did 100% of the building enclosure design and commissioning. The lowest level of the building is 35 ft. underground, and it extends seven stories above ground.

What is your least favorite part of your job?

Having to do something over because it wasn’t done right the first time. Forensics is a fun challenge but there is no good reason for a building to leak. And getting brought into a project late is frustrating.

If you could go back and re-live an IIBEC event, when would it be and why?

First of all, I’m not the type of person that would ever go back to re-live anything. I want to experience something, and then go find the next thing.

But if I had to, it would be the Region III road trip I took with Lionel van der Walt and Scott Hinesley. On the first day, we started with a visit to a meeting of the Wisconsin Chapter and ended up that evening at The Old Fashioned Tavern and Restaurant in Madison, WI. There we all had “Old Fashioned” mixed drinks, which have affectionately become the “The Madison.” The next day, we went to the University of Wisconsin and met with Director of Commissioning Courses John Davis. We met with the Iowa Chapter and then had dinner at the Machine Shed. I got a photo of Lionel driving a tractor while pulling Scott in the trailer. Finally, we traveled to Kansas City, met with the Mid-America Chapter, and I gave Lionel and Scott my tickets for the Friday night races (NASCAR) at the Kansas City Speedway.

The camaraderie that came out of that trip was not just with Lionel, Scott, and me, it spilled over into the entire board. “The Madison” became a fun reminder and built a lot of rapport among the board. 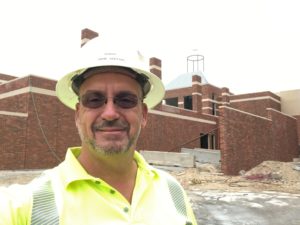 Tell me about your involvement with IIBEC.

I plan on running for the secretary/treasurer position on the Executive Committee of IIBEC in Spring of 2021.

What advice would you give today to someone starting out in the industry?

Tell me about your mentor when you started in the building enclosure field.

One individual who has been involved in my work from the beginning was Bill Mielnik. He was the project manager on my first project in 2000. He always had faith in me, always promoted me, and showed belief in all the work I did. He kicked off my career and supported me throughout. Bill just retired from the University of Iowa Hospitals & Clinic as associate director of capital management.

What do you do with your free time?

I love to spend time with my soulmate, my kids, and grandkids (my son had a new baby girl in January and my oldest daughter had a baby boy in September). I’m definitely a “gear head.” I have ten cars/trucks and a motorcycle, and I enjoy working on my cars. I have a ‘85 Chevy short-bed four-wheel-drive truck that I am currently restoring. I am also restoring a ‘69 Mustang Fastback with a Coyote 5.0 and 5-speed manual overdrive. I have a 1930 Ford Vicky (Victoria) that was featured in Hot Rod Magazine and belonged to my uncle. My uncle started me down the path when he taught me to build models when I was eight. Everything was custom.

As you know, this year we moved from an in-person convention to a virtual convention. What were some of the takeaways for you?

I did not appreciate the virtual convention as much as in the in-person event. A good portion of what we do as an association is interaction and collaboration that happens more freely when we get together in person.

What is one thing our readers would not know about you?

I am a die-hard Tony Robins fan. Since 2017, he has completely changed my life. I’ve been to his Unleash the Power Within seminar in Los Angeles, where I walked on fire barefoot. It taught me that you can do anything you set your mind to. I walked across 15 feet of 1,400-degree coals with one little burn the size of a pea because I hesitated midway. I have been to his Business Mastery programs I and II, as well as his Date with Destiny seminar. Right now, I am scheduled to attend the Life and Wealth Mastery in Fiji in January.

What’s the most adventuresome thing you’ve ever done?

Learning to fly an airplane, then getting my instrument rating and getting certified on twin engines after that. I wrote that down as a goal when I was 24 years old and finally did it when I was 40.

If you won the lottery today, what would you do?

I would spend less time working in the field on projects, and more time with my family and following my dreams. I would focus on teaching for the C3 MasterMind project and helping other people.

Is there anything else you wish to share with IIBEC members?

IIBEC has become an important part of my life and career, not only because of the things I have learned but because of the people I have met. As much as the information and knowledge has been good for my business, I would not trade anything for the friendships that I have made.