Roof Decks A to Z; Part XII: Board Sheathing

This is the twelfth in a series of articles examining various deck types. Of the numerous considerations necessary when selecting a roof system, the type of decking is among the most important. With the variety of decks to be encountered (both new and old), it is incumbent upon roofing experts to be the authority on these matters. This article will explore features of older wood plank decks that are not of a tongue-and-grove profile (commonly termed “board sheathing”).

Wood plank decks, being found in low-sloped, pitched, and even curved surfaces, can take many forms; they can be of several configurations. Even if we filter it down to board sheathing only, there can be square edges, shiplap edges, spaced decking, and the ordinary tongue-and-groove (that profile was explored in Part II of this series). Therefore, merely reporting or stating that it’s a “wood deck” is not sufficient. Figure 1 depicts one such board sheathing deck on an older barrel-type shape where restoration/upfit was underway. For decades, it was common to find 1-in.-thick boards ranging up to 12 in. wide. These may have been nailed together tightly when installed, but wood shrinks as it dries, so eventual gaps of ½ in. or more are commonly found. Reroofing ventures over this type of decking can sometimes be challenging. Figure 2 depicts one such instance where a deck was left exposed for much longer than appropriate. This deck has distorted in response to cycles of wetting and drying; now, much of it will require repair before a covering can be applied. More unsettling, older structures may be found with two or three layers of something over the original roof. Figure 3 depicts an old slate roof that was later topped with two layers of shingles.

Elsewhere, the author has encountered two layers of shingles installed over original wood shakes, as well as other bizarre combinations; an old wood plank deck usually lurks below this mass of materials. As more layers of roofing are added, there is an increasingly remote chance for water to percolate its way through to the roof deck. This can give the false impression that the roof is performing adequately. Stacking roof layers in this manner is a departure from rational thinking—and very likely a code deviation unless there has been formal approval by petitioning for a variance consideration.

In contrast with “solid” board sheathing being explored here, spaced decking may be encountered as well. Also known as “skip sheathing,” this arrangement may be found below wood shakes, slate, and tile (Figure 4). When problematic gaps are revealed on board sheathing, asphalt shingle manufacturers commonly recommend an additional layer of 3⁄8-in. minimum exterior-grade plywood or oriented strand board (OSB) sheathing on top of the original deck. In new construction, edges of sheathing OSB. Although topside fastening is mostly “blind,” some care can be taken to find support joists and engage new sheathing edges to the supports. Figure 5 depicts spaced decking on an old church that was later topped with OSB sheathing. Only when under-deck access was finally gained did the original skip sheathing become known (the attic door opening was very small, with few individuals ever attempting entry). With the deck overlay alternative discussed here, there may sometimes be a structural loading consideration. This will hinge on matters of rafter/support type and spacing, slope, potential for rooftop snowdrifts, etc. Accordingly, the decision to overlay should include proper scrutiny of likely loading scenarios. Old board sheathing decks will commonly need repairs before the new covering can be installed (Figure 6). The effort in carrying out such repairs is well worthwhile. When individual planks are replaced, it is advised that the new members be situated across several supports. Just as with plywood or OSB, board sheathing provides some lateral stability for the framing, and small plank fractions are not as sturdy as longer elements that span multiple supports. Figure 7 depicts a newer roof that had been installed with little thought given to proper deck repairs; this merely postpones a correct remedy for the next roofing team. Often found in older structures (Figure 8), the wide decking gaps create the likelihood for nails to occur in plank joints. Heavier underlayment can be deployed, but over time, there will probably still be sagging of underlayment into the void, and eventual leakage will usually occur here first, especially at lower slopes. Fastening that does not engage the planks reduces wind resistance, frustrates the installing mechanic, and hinders rooftop production (Figure 9). When lightweight shingles are used, gaps exceeding ¼ in. may telegraph through and become visible. For shingle manufacturers, the figure of ¼ in. is the increasingly common gap limit allowed in order for warranties to be honored.

As outlined earlier, wood shrinks as it dries—just like many other construction materials (Figure 10). Note that shrinkage of wood planks is seldom uniform. The occurrence of wide gaps will require a judgment call regarding the proper course of action (Figure 11). Note that if deck planks are 6 in. wide and a 5⁄8-in. gap is present between planks, there is a 9.4% chance that any random nail will occur in a joint opening; where joints are ¾ in. wide, there is an 11.1% chance for nails in a gap. That is a lot of wayward nails for the new roof covering.


The same shrinkage that prompts development of gaps can cause loosening of the nails originally used. Therefore, as part of deck preparation, any loose boards should be resecured prior to the installation of the new covering. Threaded fasteners are preferred for this work, as they will remain well engaged during the new roof’s service life.

Many board sheathing decks are still around, and the wide gaps can create fastening problems. Those practicing in restoration and historical renovation are sure to eventually be involved with this type of substrate. It would be wise to anticipate at least some corrective work, possibly to include a complete overlay with plywood or OSB sheathing. In that event, there should be verification of load-carrying capacity of the roof framing. Finally, edge attachment measures for any new overlay sheathing should be honored just as in new construction. 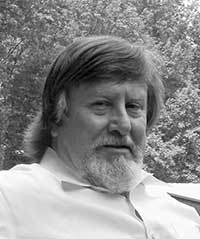 Lyle Hogan is owner and principal engineer of Fincastle Engineering, Inc., Greensboro, NC. He is a registered engineer in five states, a Registered Roof Consultant, a Fellow of RCI, and an ICC structural masonry inspector. He has designed and administered roofing projects in half of the U.S. using a variety of systems. Hogan has received RCI’s Lifetime Achievement Award and its Michael DeFrancesco, William C. Correll, and Richard M. Horowitz Awards.

2 responses to “Roof Decks A to Z; Part XII: Board Sheathing”