How Stuck is the Stucco? A Method for Measurement and Analysis 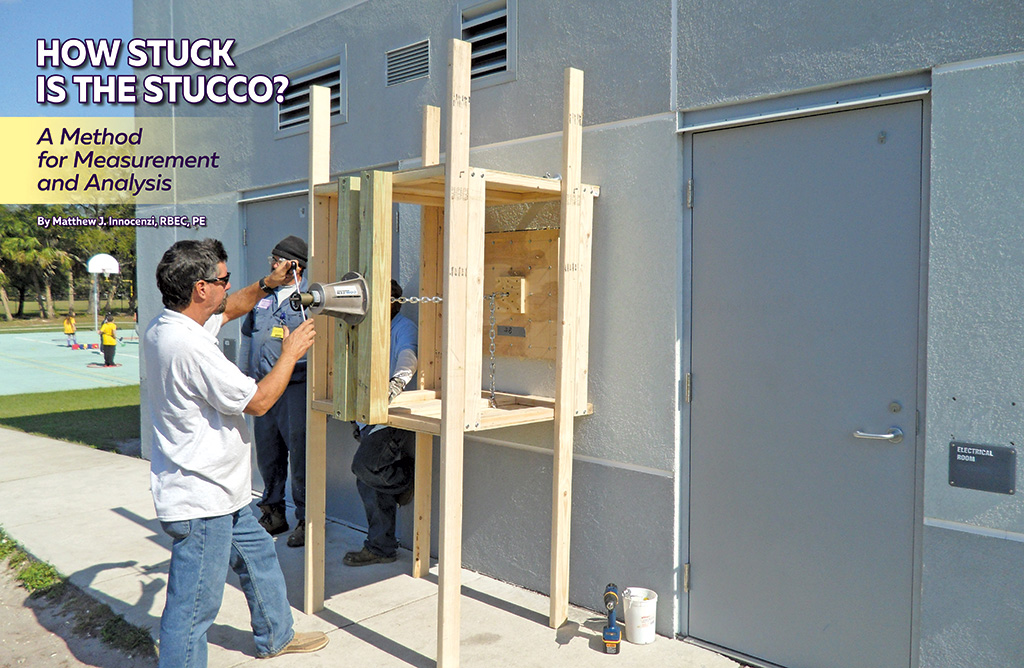 Stucco is a popular and versatile cladding material that is commonly found in the southern United States. The application of stucco can be broken into two key categories, depending on the substrate to which it is applied: (1) direct-applied stucco and (2) stucco over lath. In the former application, stucco is applied over a solid substrate, which is defined as one that has the proper suction characteristic to absorb water, but it is not adversely affected by moisture. Examples of solid substrates include cast-in-place concrete, concrete masonry units (CMU), stone, and brick masonry. In the latter application method, stucco is applied over lath. For years, lath was predominantly manufactured of metal, but recent developments of ASTM standards now include non-metallic (i.e., plastic) lath. Lath is used in conjunction with accessories that serve a variety of functions, ranging from performance to aesthetics.

The application of stucco is predominantly governed by ASTM C926, Standard Specification for Application of Portland Cement-Based Plaster. ASTM C926 is germane to plaster, regardless of its application (i.e., direct-applied or stucco over lath) and addresses stucco mixes, thickness, curing, and surface preparation, to name a few. The companion documents to ASTM C926 include ASTM C1063, Standard Specification for the Installation of Metal Lath and Accessories; and ASTM C1787, Standard Specification for the Installation of Non-Metallic Lath and Accessories, which, as their titles imply, pertain to the materials and installation of the lath and accessories for stucco-over-lath construction. For the purposes of this article, the author will focus on ASTM C1063 (metallic lath) when referencing stucco-over-lath construction.

Stucco cladding is a prescriptively specified assembly, meaning that its constituents, mix, installation of lath and accessories, and application of the stucco itself must comply with the ASTM C926 and C1063 standards to be rendered acceptable. There is no performance standard for the structural resistance of stucco cladding. Until recently, there was no industry standard that provided a consensus-based method for testing the stucco. The lack of any scientific testing or means for evaluating stucco cladding affected both types of stucco in the manners described below.

ASTM C926 addresses the application of direct-applied stucco. Section 5 of ASTM C926 requires the surface be prepared to receive stucco by scarification or roughening of the substrate to provide a mechanical interlock. Bonding agents can also be used—often in conjunction with the scarification—to enhance the bond between the stucco and substrate and between individual stucco coats. In cases where bond cannot be achieved through scarification or bonding agents, ASTM C926 requires installation of lath and accessories in accordance with ASTM C1063. There are no quantitative data for the bond strength, nor is there a consensus on what the bond strength should be.

Similar to direct-applied stucco, ASTM C926 also governs the mix, curing, and application of stucco-over-lath construction. In this application, ASTM C926 is used in conjunction with ASTM C1063 for the installation of the metal lath and accessories. ASTM C1063 requires lath fasteners be spaced at 7 in. on center along the length of supports (e.g., studs), which are to be spaced at either 16 or 24 in. on center. As with other stucco application and lath installation requirements, the fastener spacing requirements are prescriptively based. In fact, the unusual fastener spacing of 7 in. on center was derived from locations of ribs on high-rib lath; ribs were located at the one-quarter points, along the width of the lath, which was manufactured in 28-in. sheets. There is no scientific basis to validate or evaluate the adequacy of the 7-in.-on-center spacing. Interestingly, the author is aware of anecdotal evidence that suggests the 7-in.-on-center spacing may not be suitable for certain high-wind regions along the southeastern coast of the United States because the code-prescribed wind loads can exceed the calculated pull-off strength of the lath. As with direct-applied stucco, there are no quantitative data regarding the pull-off resistance of the ASTM C1063-mandated fastener spacing.

In March 2018, a new test method, ASTM C1860, Standard Test Methods for Measurement of Tensile Strength or Bond Strength of Portland Cement-Based Plaster by Direct Tension, was developed and adopted within ASTM C11.02 subcommittee (Specifications and Test Methods for Accessories and Related Products) to measure the pull-off resistance of stucco panels in both direct-applied and stucco-over-lath applications. The new test method was drafted in response to great uncertainty and controversy within the industry on how to evaluate the pull-off testing. The task group responsible for the development of this test method opted for larger specimen sizes to capture an accurate representation of the stucco application and avoid isolated areas of poorly bonded stucco. Representative photographs of the pull-off testing are provided in Figures 1 through 4. More detailed information on the size and location of the test samples is found later in this article.
Although acceptable pull-off resistance values are a topic of great debate, no language about these values is provided in the main body of the test method; some commentary on failure loading and calculations of site-specific safety factors is provided in the non-mandatory appendix. Some consultants believe that as little as 3 psi bond strength in direct-applied stucco is all that is required, as this value represents nearly 430 psf, which is nearly double the greatest wind load calculated using the procedure in ASCE 7. Other consultants will reference industry standards from other building materials, such as concrete or masonry, in an attempt to correlate an appropriate bond strength for stucco. For example, ICRI recommends a bond strength of 150 psi for concrete deck overlays. The author opines that reference to a concrete deck overlay is inappropriate for stucco and taken out of context. Moreover, the author believes that such an extreme value is not required for stucco bond strength. Even with the new industry-wide, consensus-based test method on how to test the stucco, the selection of an acceptable value for stucco pull-off is left to engineering judgment.
While primarily used as a tool in direct-applied stucco, pull-off testing can be applied to evaluate stucco-over-lath construction. As previously mentioned, the required lath fastener spacing of 7 in. on center is a prescriptive requirement that was based on legacy and decades of satisfactory performance. There is no scientific correlation between the required lath fastener spacing and its actual resistance to lateral loads. It is possible, with the new test method, to correlate a pull-off resistance to the required lath spacing to validate its acceptability, particularly in high-wind regions of the United States.
The new ASTM C1860 test method offers the following key test characteristics:

It is important to note the new ASTM C1860 test method does not offer any specifications or instruction on interpreting the data. The test method is simply a way to perform the testing and should not be misconstrued as an evaluation standard. While it is beyond the scope of the test method to evaluate the performance of the stucco, the data obtained from the testing can be used in conjunction with an engineering analysis of plate mechanics to determine the maximum allowable size of stucco delamination that is permitted without supplemental fastening or repair. 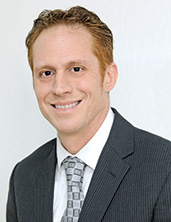 Matthew Innocenzi is principal at Nick Innocenzi & Sons Consulting Engineers and Associates, LLC (NISCEA) in Warrenton, VA. He received both bachelor’s and master’s degrees at Virginia Tech and has over 19 years of experience as an engineering consultant. He is an active member of ASTM C11 and D08 committees on Gypsum and Related Building Materials and Prepared Roofing Systems, serving as chairman and technical contact for ASTM C926, Standard Specification on the Application of Portland Cement Based Plaster, and the newly adopted ASTM C1860, Standard Test Methods for Measurement of Tensile Strength or Bond Strength of Portland Cement-Based Plaster by Direct Tension task groups.

5 responses to “How Stuck is the Stucco? A Method for Measurement and Analysis”